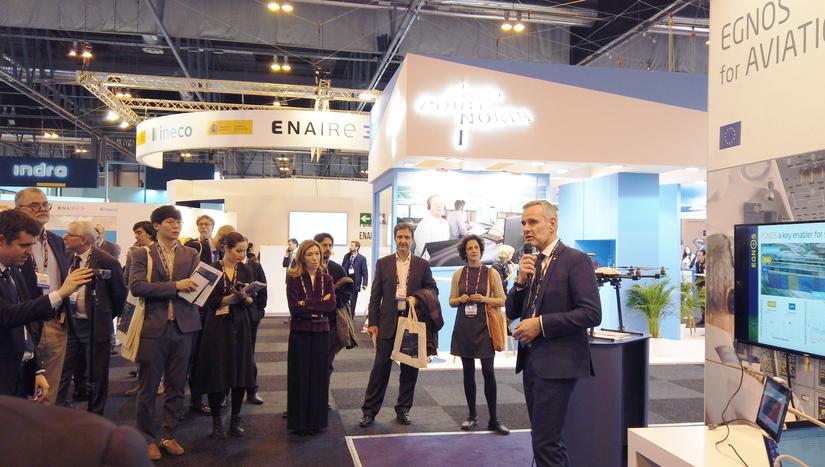 GSA highlights added value of EGNSS for drones at WATM 2019

The added value of EGNSS (Galileo and EGNOS) for drones was the focus of a special session organised by the European GNSS Agency (GSA) at this year’s World ATM Congress in Madrid on 12 March, at which representatives from several projects spoke about how they are benefitting from the European space programme.

Opening the session, GSA Market Development Officer Carmen Aguilera and European Satellite Services Provider (ESSP) CEO Thierry Racaud talked about advances in EGNOS applications in aviation and the natural spill-over and evolution into drone technologies, presenting the premiere of a promotional video for EGNOS usage in drones. “Today we will hear about projects that are demonstrating the benefits of both EGNOS and Galileo for drones operations,” Aguilera said.

At the session, Victor Gordo, Ineco Senior Project Manager presented Terra (Technological European Research for RPAS in ATM), an H2020 project. This project aims to leverage existing and potential new technologies to develop a ground-based U-Space architecture that will accommodate a large base of RPAS in a mixed mode (manned and unmanned) environment.

Increased integrity and accuracy
Gordo explained how user needs are surveyed and taken into account during drone development, particularly with respect to the integration of EGNOS and Galileo. “We started out with a top down approach, but are now moving towards a bottom up approach,” said Victor Gordo, adding that this ensures that the requirements of end users are met. “Different users will be employing drones in different capacities, some will fly between buildings in large cities, others will have different uses, and thus the different requirements must be identified,” he said.

Presenting the GAUSS GSA-H2020 project was represented by Adrian Jimenez-Gonzales from Everis Aerospace & Defence, which is sharing the new EUROCAE subgroup on Multi GNSS for UAS. He said that the integration of Galileo and EGNOS into drone technology is mainly focused on safety and security, thanks to the increased integrity and accuracy that they provide. This is particularly relevant given the growing popularity of drones, Jimenez-Gonzales said. “Due to their growing popularity and usage, in the near future will see hundreds of drones sharing airspace, making the added value of EGNOS and Galileo, specifically improved manoeuvring, and accurate positioning, all the more relevant for public and airspace safety,” he said.

Defining EGNSS standardisation for drones
GMV Project Manager Marta Cueto Santamaría presented the EGNSS 4RPAS project, and outlined the European Commission’s strategy to promote the use of EGNOS and Galileo. “Drones have been identified as a very promising technology,” said Cueto Santamaría. “This makes it all the more necessary to define the EGNSS standards for drone operations and obtain all the benefits that EGNOS and Galileo have to offer,” she said.

Finally, Carmen Aguilera highlighted how “both EGNOS and Galileo provide the accuracy, integrity and security needed for drone operations.” She closed the session with an update on the current ongoing work on creating a digital signature for Galileo to combat the ever growing issue of jamming and hacking, and to continue strengthening the secure image of Galileo-enabled drones.