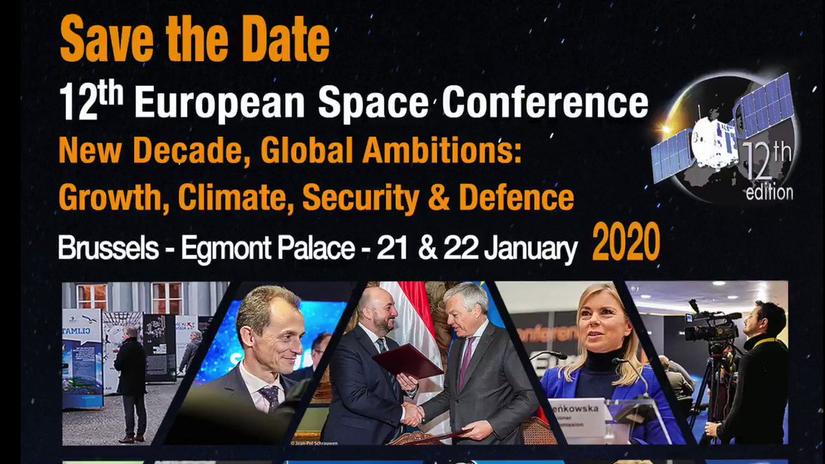 The 12th European Space Conference put the focus on climate, development and security

European Union's Space Programmes EGNOS, Galileo and Copernicus are established as world-class references for their high quality services. The European Commission proposed a 16 billion-euro-budget for the EU Space Programme for 2021-2027. As a result, all EU space activities are now collected in just one type of legislation: the EU Space Act. As of now, the legal text is almost agreed upon.
On top of this, the launch of the Ariane 6 and the Vega C is meant to ensure Europe’s autonomous access to space. The European Space Agency pre-booked four other Ariane 6 launches to anticipate the future needs of Galileo.

The focus is on collaboration and strategy

There was a great variety among the speakers’ list. There were European Commission delegates and speakers from ministerial level. Besides, there were high-level space specialists from private companies. In his speech, Vice-President of the EC Josep Borrell addressed the strategic nature of ‘space’. He put the emphasis on the collaboration. According to his words, this “enables people, including their enemies, to work together. It is a collaborative approach.” Margarethe Vestager, the EC’s executive Vice-President, said: “Space has a deep influence in our daily lives. And, we have not reached the full potential of European Space yet. Europe’s space assets allow us to work in a strategic and autonomous way. There is a huge set of opportunities.”

Climate and space partnership with Africa

Jan Wörner, Director General of the ESA and Jean-Loïc Galle, President and CEO of Thales Alenia Space, stated that the Green Deal in the EU is ‘unthinkable’ without space. Wörner said that “We are working together, joining forces between ESA, EU and the European industry. Together we are stronger, we are the United Space In Europe”.

The focus was set also to the space partnership between Europe and Africa. ‘Wireless’ satellite telecommunication is just one example of the vast potential for the African continent.

The emphasis on growth

The second day of the 12th European Space Conference was about growth. Luxembourg Deputy Prime Minister Etienne Schneider stated announced an investment between 200 to 500 million Euros for new space, implemented by the state and some private investors.

The attention to Galileo

As for the growth of European space sector, lots of attention was given to the Galileo system. Thierry Breton stated the objectives for Galileo: “First, to continue deploying Galileo in order to reach the full operational capability as soon as possible. Second, to continue improving the precision of Galileo with a target of 20 centimeter precision. Third, to prepare already now the second generation of Galileo, in order to stay ahead in the technological race. The transition batch procurement is ongoing. Fourth, to ensure the smooth development of the encrypted signal (PRS), because Galileo is also a strategic asset, designed to be used for military and civil security purpose”.

In Europe, space security focuses on debris, risky asteroids and the effects of space weather. Besides, Galileo has a defence dimension, Copernicus can serve security missions. And ESA will strengthen this trend in the future.