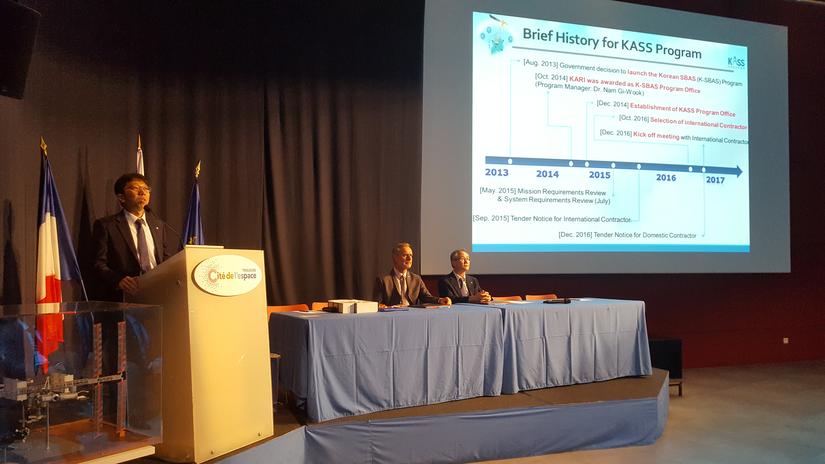 First contract between ESSP and KARI

ESSP has recently signed a framework Contract with KARI (Republic of Korea Aerospace Research Institute) to support them on the set-up of the future Korean Service Provider for KASS, the Korea Augmentation Satellite System similar to the European EGNOS.

This contract is signed just one year after KARI awarded the company Thales Alenia Space with a wider frame contract to develop the KASS system.

KASS system will be based on EGNOS (European Geostationary Navigation Overlay System) system fundamentals. EGNOS has been successfully operated by ESSP since 2011.

The Republic of Korea will initially be using KASS to provide aeronautical applications services, including Safety- of -Life services so that it can be used during different flight phases, especially precision approaches and landings. It will eventually extend these services to other applications, including maritime, road or rail.

This ESSP’s first contract with KARI concerns activities in support of the creation of the KASS Service Provider, such as operations and maintenance of the system; the certification process and the definition of the services to be delivered to the aviation users.

Thierry Racaud, ESSP CEO stated “it is a great opportunity for ESSP to transmit its expertise to the Korea Aerospace Research Institute. Being involved in EGNOS since its beginnings gives ESSP an extra amount of knowledge for the provision of Satellite Services. We hope that this initial relationship grows and extends its benefits for all parties involved”.

Dr. Gi Wook Nam, Executive Director of SBAS R&D Head Office at KARI added "I am confident that through our efforts and commitment put into this remarkable contract with ESSP, we will be able to achieve more and continue to develop even stronger relationship and friendship between Korea and France and even with Europe”.