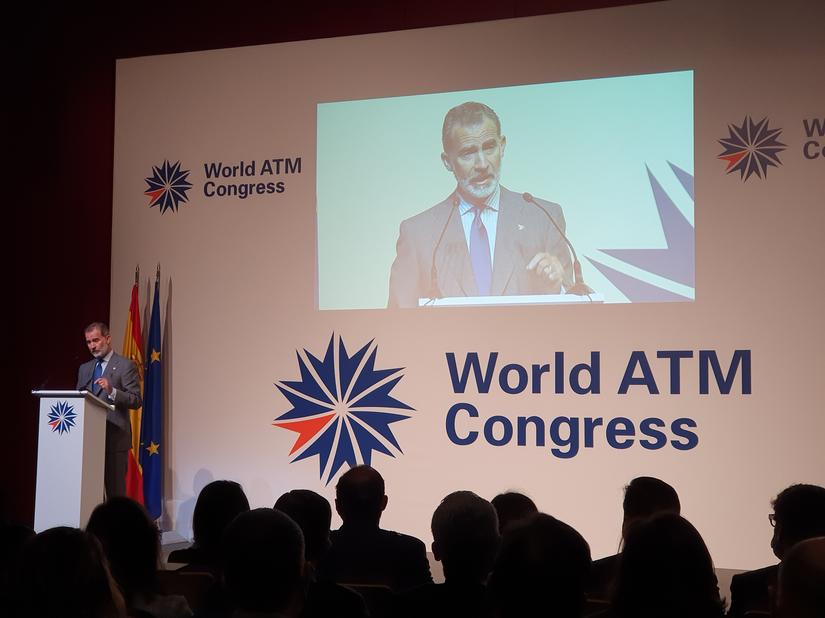 The King inaugurated the World Congress on Air Traffic Management

King Felipe VI presided this Tuesday the inauguration of the World Air Traffic Management Congress World ATM Congress, organized by the Civil Air Navigation Services Organization (CANSO), in collaboration with the Air Traffic Control Association (ATCA). The World ATM Congress represents the largest air navigation event, which brings together managers and technicians in the sector and is held at IFEMA, in Madrid.

Upon his arrival at IFEMA, the King was received by the Secretary of State for Transport, Mobility and Urban Agenda and President of Enaire, Isabel Pardo de Vera; Air Traffic Control Association (ATCA) President and CEO Brian Bruckbauer; the director general of the Civil Air Navigation Services Organization, Simon Hocquard; the president of Expodrónica, Isabel Buatas; the Chief of Staff of the Air Force, Javier Salto, and the Director General of IFEMA, Eduardo López-Puertas, among other authorities.

Next, and after a group photograph, the King entered the auditorium and took his place in the first row of seats. Then, the master of ceremonies, Jorge Milton Ramírez, liaison between the congress and the industry, welcomed and announced the interventions of the president and executive director of ATCA, the general director of CANSO, the president of Expodrónica, and the secretary of State of Transport, Mobility and Urban Agenda and president of Enaire. During the speeches, videos were shown on the latest edition of the World Air Traffic Congress,  as well as Expodrónica and Enaire.

At the end, Don Felipe addressed a few words in which he stressed that “our presence here today, after cancelling the previous year's edition for obvious reasons, and being able to organize this Congress again, is not only a pleasure, but a solid proof that we are witnessing a constant, necessary and long-awaited recovery of the entire airline sector, of which Spain is proud to be champion”.

In addition, the King assured that "for our country it is the recognition of a job well done during the eight consecutive editions that we have had the honour of being hosts and that we hope and wish it to be for many more years." In his opening speech, Don Felipe highlighted the enormous global challenge posed by the arrival of drones in the world of aviation. "Spain is very active in this regard, both nationally and internationally, and maintains close collaboration with our European partners, defining the framework of operations both in the present and for the closer future".

Likewise, he stressed that “the most valuable trips are those we undertake together with people who pursue the same dream: a project of peaceful coexistence and shared prosperity for all. Let's keep sharing projects and let's keep building the future; with hope and determination”.

After the opening ceremony, the King left the auditorium and went to pavilion 9, where he began a tour of the stands, ending the visit.

The World ATM Congress has obtained several awards that demonstrate the good reception it has had from the public. Thanks to an agreement between IFEMA together with World Air Traffic Management, this event will be held in the same space for another five years, thus making the city the world center of the powerful air transport industry.

This congress includes the latest trends and advances related to the area of ​​area navigation. It will bring together professionals dedicated to air traffic management and leading international companies in the manufacture of aircraft and air navigation systems. This representation comes from more than 130 different countries and encompasses the entire spectrum of the air navigation industry. Professionals in the sector will have the possibility of increasing their network of contacts and closing deals on the spot.