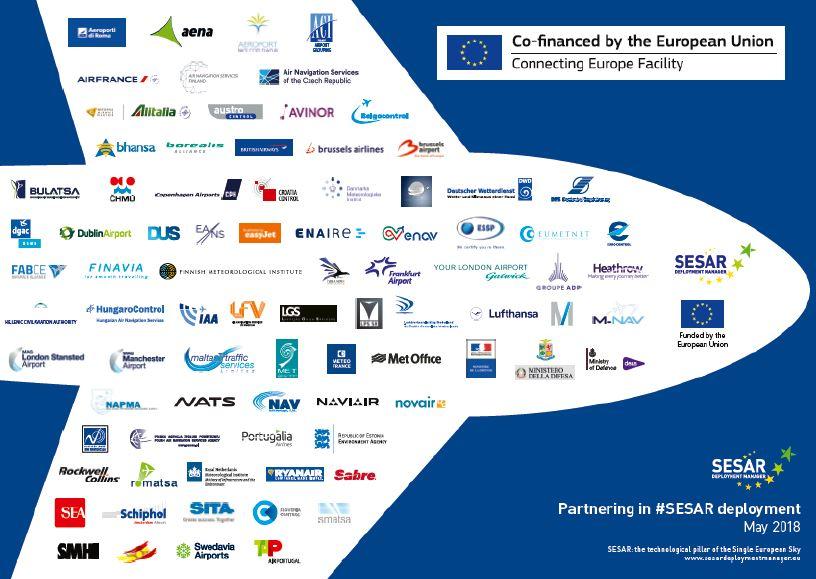 At the end of July 2018, all 19 members of the SESAR Deployment Alliance (SDA) in their role of SESAR Deployment Manager (SDM), representing airports, airlines, and ANSPs, came together to sign a joint letter, which outlined the alliance’s commitment to continue their role in deploying SESAR beyond 2020

One of the main messages of the letter was to express the commitment of these 19 members to continue their role as SESAR Deployment Manager in the next Multiannual Financial Framework starting on the 1stJanuary 2021,and speed up the deployment of SESAR by keeping the aviation industry in the cockpit for continuing the modernization of the European skies.

Jonathan Astill, Chairman of SDA’s Board and Nicolas Warinsko, General Manager of the SDA then delivered the letter to the Director General for Mobility & Transport at the European Commission, Henrik Hololei.

As Mr. Warinsko said “This is more than just a piece of paper. It is a strong and firm offer illustrating that all 19 members want to carry on working toward the modernization of European airspace.”

Since its establishment, in December 2014, SDA in the role of SDM has been successful in translating the Pilot Common Project (PCP) Implementing Regulation in the SESAR Deployment Program, fully supported by the operational stakeholders.

This wide buy-in translates in to more than 300 projects deploying SESAR within the Connecting Europe Facility (CEF) framework under SDM coordination. This represents more than 70% of the PCP implemented or being implemented by 85 civil and military Implementing Partners in 34 States enabled by EUR1.4 billion of private investments and EUR1.1 billion of EU grants. As soon as the European Commission decides on the Call 2017, PCP implementation will rise to 85%.

More importantly, SDM and the Implementing Partners have already completed 75 projects for about EUR200 million worth of investments which already deliver actual contribution to Europe’s ATM performance in the range of EUR30million worth of benefits just for this year, and more than EUR600million cumulated until 2030.

Click here to view the signed letter: Letter to EC signed by all SDA members

The SESAR Deployment Manager (SDM) function is defined by the Article 9 of Commission Implementing Regulation (EU) N°409/2013. Under the oversight of the European Commission, the SDM function consists of the synchronisation and the coordination of the deployment of the Common Projects. A Common Project is a Commission Implementing Regulation which mandates the implementation of the most essential operational changes in the European ATM Master Plan by the Member States of the European Union and their operational stakeholders. The first Common Project is known as the Pilot Common Project (PCP) and is defined by the Regulation (EU) N°716/2014. The SDM synchronises and coordinates implementation against the SESAR Deployment Programme which is a project view of the Common Projects organizing their implementation into optimum sequences of activities by all the stakeholders required to implement. To develop and maintain the SESAR Deployment Programme in close consultation with all the stakeholders is another important task under the SDM function.

The SDM function is performed by the SESAR Deployment Alliance (SDA). The SDA is a “Not-for-Profit” International Association (AISBL) set-up under Belgian Law and composed of leading airlines, airports and air navigation service providers – the managers and users of Europe’s airspace. They are committed to the principle of the Single European Sky and to deploying the technologies that will deliver it to create customer and environmental efficiencies. SDA currently coordinates the implementation of 300 Air Traffic Management modernization projects of which 75 already completed and bringing benefits to the European passenger.