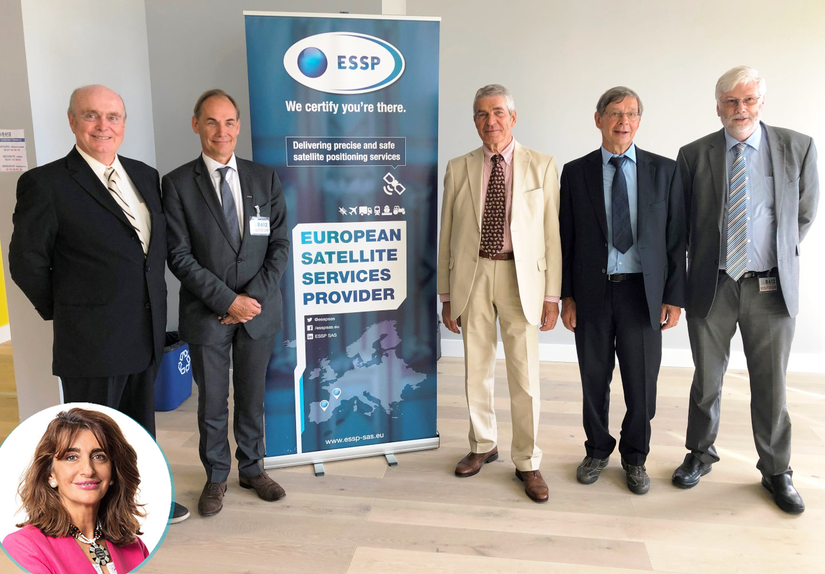 ESSP (European Satellite Services Provider) started its operations as a French SAS (société par actions simplifiée – joint stock company) in April 2009, with its first EGNOS contract for the European Commission. With this new contract, the company decided to move from Brussels to Toulouse and Madrid.

The membership of ESSP SAS has not changed since 2009, and remains distributed among 7 major European air navigation service providers:

As ESSP is celebrating its 10 year anniversary, its personnel wanted to pay tribute to the representatives of the 7 ANSP, the pioneers who signed the acts of creation of the company. There were present:

The pioneers gathered on Tuesday, June 25 in ESSP’s Toulouse office.

M. Frédéric Pradeilles, CNES Director of the Toulouse Space Center was also invited to join the celebration: EGNOS would not have existed without CNES, and CNES hosted ESSP SAS on its Toulouse Space Center from its inception in April 2009 until the company moved to the B612 building in March 2018.

The visit started with Philippe Chappuis (Chairman of the Board), Thierry Racaud (ESSP CEO), and the Board of Directors giving them a warm welcome. They were told about some of the major milestones that the company passed since 2009 on, and remembered that the company was created to act as the operator and service provider of EGNOS, the European satellite based navigation system, nowadays managed by the European GNSS Agency, an agency of the European Union.

The founding members mentioned how gratifying it was for them to see that such a start-up company they founded back in 2009, became what ESSP is now: a dynamic enterprise with 120 employees from 10 nationalities. Also they were impressed to note that more than 600 EGNOS approach procedures are now available on more than 300 airports, and that EGNOS related projects have started in Asia and Africa.

A cocktail with all ESSP employees followed and the founding members were asked about what had been the most remarkable milestone they have experienced with EGNOS or ESSP?

Michel Magnard remarked that “it was stratospheric to speak about a role for skyguide in satellite navigation in 1997”, and Bernd Schuh remembered that “many meetings and difficult negotiations were held at that time, and it took a while to finally get offices at the French Space Agency in Toulouse”.

When asked what they foresee in the future for ESSP?

Ken Ashton expects that “general aviation will put EGNOS capability into place in all aircrafts creating a level playing field”.

Bernd Schuh “would like to foresee that ESSP’s activities beyond EGNOS will keep on growing”.

Marc Hamy pointed out: “Aviation is about innovation, ambition. We have the feeling of having to do it together, this is a European project. EGNOS is moving into business and commercial aviation, for instance the Airbus A350 is ready for LPV and the A330 and A320 will soon follow. That is why we can say that after 10 years, ESSP has had a real success on implementing EGNOS”.

Marc Hamy wishes ESSP’s team great success for the future. He foresees a brilliant future with some challenges. But he cannot avoid remembering that “life in the end is always about challenges”.

Mariluz de Mateo pointed out: “I think that we should be proud of the excellent activities performed by the ESSP operations and service provision units in Toulouse and Madrid respectively; this is a key asset of the ESSP that should be preserved in the future“.

ESSP employees thanked the founding members for the bold decision they made in 2009, through which they can now take part in exciting projects and contribute to a great venture.