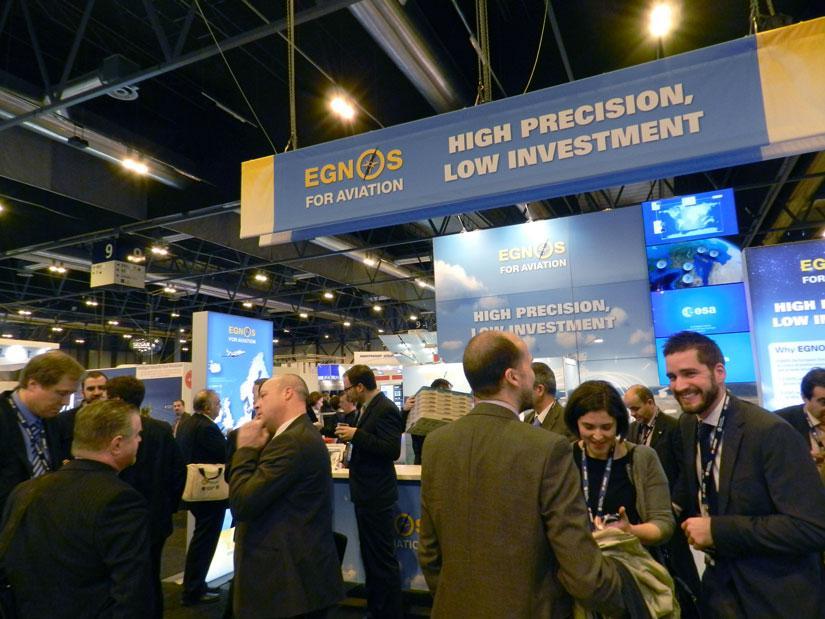 The World ATM Congress proves to be an ideal venue for EGNOS to engage with partners and to introduce airports and ANSPs to the benefits of Performance Based Navigation (PBN). An EGNOS dedicated workshop organised by the European GNSS Agency (GSA) and ESSP on 4th March brings together ANSPs and airports interested in operational implementation.

The theme of this year’s World ATM Congress, which took place in Madrid on 4 - 6 March 2014, was ‘Delivering the Future’. With a prominently placed stand at the Congress, EGNOS was clearly positioned as a service with a key role to play in the future of aviation in Europe.

Thierry Racaud, CEO at ESSP, which is the EGNOS service provider under a contract with the GSA, said that a lot of work remains to be done to promote the EGNOS service, which is what makes events like the World ATM Congress so important. “We have nearly 100 LPV approaches that have been certified, plus APV Baro authorised to be flown with EGNOS vertical guidance in several countries, and the idea now is to have more and more ANSPs and more and more airports using the system,” he said.

In his opening address at the EGNOS PBN Implementation Workshop, Mr Racaud said that the three years of hard work since the launch of the system had finally started to pay off, as localizer performance with vertical guidance (LPV) procedures are currently being implemented at European airports.

Noting that EGNOS is an integral part of the world-wide satellite-based augmentation system (SBAS) scenario, GNSS Projects Development Manager at ESSP Javier de Blas said at the workshop that the goal of the EGNOS safety of life service is to support civil aviation by enabling the implementation of LPV approach procedures. He said that 17 EGNOS Working Agreements (EWA) had already been signed and 171 EGNOS-based approach procedures authorized.

De Blas said that this was just the beginning and an ambitious roadmap had been put in place to improve the service area, to improve the existing service levels, to increase the robustness of the system and to enhance the existing interfaces with users so they can make use of EGNOS services.

The GSA’s Aviation Market Development Officer, Carmen Aguilera, outlined the initiatives in place to support LPV implementation. She said that the GSA is launching the implementation of the first LPV procedures in seven countries in 2014, as an exercise to gain the necessary competencies at national level, leading to a further plan for EGNOS adoption in the PBN plans. She said that support was being provided in the form of training, technical expertise and ad-hoc support meeting the needs of each specific scenario. A successful incentive scheme is set out t under the FP7 ACCEPTA project, co-funding LPV implementation to almost 80 runway ends and upgrading avionics on 44 aircraft. Further support is available to interested ANSPs and airports that request it, either in the form of technical assistance or cost benefit analysis to assess the feasibility of the investment.

The EGNOS PBN workshop provided an opportunity to recognize the efforts of some of the ANSPs and operators that have recently signed EWAs or published their first LPV procedures.

Award recipient Per Ingar Skaar, Director of Projects and Business Development at Norwegian airport operator Avinor, was emphatic about the benefits that EGNOS had to offer. He said that up to now his company had been using traditional systems, which were imprecise and expensive. Skar said that Avinor planned to implement full PBN coverage by 2016 and that EGNOS was an important element in this plan.

Within the Norwegian context, where there are many small airports providing crucial transport links to remote communities, he said that it is important to supply the next generation of navigation support, adding that this is what EGNOS provides. The implementation of the first LPV procedure at Rost airport is on its way, leveraging GSA support.

Daniel Schaad, Head of Procedure Design at Austrian ANSP Austro Control, said at the award ceremony that the LPV implementation had been an exciting process that had worked very well. He said that the main driver in Austria had been the general and executive aviation community, which the company sees as its main user base.

Noting that in some small regional airports it may be expedient to fully replace instrument landing systems (ILS) with LPV, he said that in most cases LPV would work alongside ILS as a complementary tool to enlarge the portfolio of approach procedures offered. The first LPV procedures in Austria are fully operational at Linz and Graz airports since January 2014 and were co-funded within the framework of the EU FP7 ACCEPTA project.

Matts-Anders Nybers, Head of Business Innovations, Air Navigation Services at Finnish airport operator Finavia paid particular attention to the business case for EGNOS-based LPV, as a solution that can help companies control costs. Instead of investing in traditional land-based equipment, he said that EGNOS provided the company with an opportunity to modernize its equipment at airports at a very low cost. Joensuu airport is the first case of LPV implementation in Finland, leveraging the GSA support via the EU co-funded FP7 ACCEPTA project.

Receiving a reward on behalf of Spanish ANSP AENA, Gonzalo Alonso, head of the company’s international division, said that AENA started flight demonstrations back in 2006 and seven years later, in 2013, it was able to start with the first procedures. He stressed that, now that the groundwork had been done, implementation of subsequent procedures would not take so long.

Carin Holtzrin-Kjellander, Senior ANS Advisor at Swedish ANSP LFV, said that her company’s priorities were to provide a safe, efficient, environmentally sustainable service while cooperating with others in the ATM sector, adding that EGNOS would help the company achieve these goals. She said that, following LPV implementation at Gothenburg airport, the pilot case implemented with GSA support, there were plans to engage  5-6 more airports in 2014 and approximately 10 more airports next year.

Looking to the future

Winding up the conference Alejandro Fransoy, an EGNOS marketing and promotion expert at ESSP, said that even though a lot of progress has been made, that there is still a need to boost LPV implementation adoption. He said that ESSP plans to conduct a thorough analysis of the current situation - not just with LPV implementation, but also the overall PBN implementation plan in different countries, in order to identify the various gaps and support needs, and actions required to address these.

Furthermore, a set comprehensive technical awareness and guidance materials will be made available for both ANSPs and operators, especially newcomers, in order to facilitate the implementation process and ensure the wider uptake and use of EGNOS services throughout Europe.