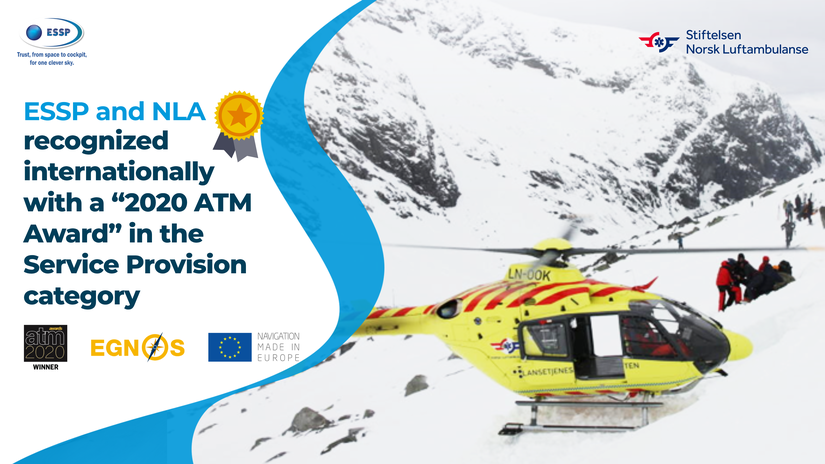 ESSP (European Satellite Service Provider), in a joint nomination with NLA (Norsk Luftambulanse As), have been awarded the 2020 ATM Award in the “Service Provision” category with a case named “EGNOS service provision scheme for rotorcraft operators in class G Airspace”, recognising contributions to safe, cost-effective and efficient airspace management.

EGNOS service provision is carried out by ESSP-SAS under a contract with the European GNSS Agency (GSA), within the framework of the European Commission space programme.

In order to establish the operational and legal framework to use the EGNOS Safety-of-Life Service as a navigation aid, an EGNOS working agreement was established in August 2019 between ESSP and NLA, a Norwegian rotorcraft operator in full coordination with the Norwegian Civil Aviation Authority.

On NLA’s opinion, “EGNOS precision signals and services have contributed to a safer transfer of patients in poor weather conditions and helped NLA to save lives. In addition, the accessibility and efficiency gains offered by EGNOS on HEMS mission have made the difference between life and death of a critically ill patient in remote areas with limited medical services available and in poor weather conditions”.

EGNOS is not only beneficial to leisure, business or commercial aviation. It demonstrates here its added value in supporting rotorcraft operations, especially in difficult environmental scenarios, providing a wide range of navigation and approach solutions, all based on the accurate satellite navigation capability.

The award has been announced by the ATM Magazine at the virtual Awards Ceremony celebrated on February 12th.

Thierry Racaud, ESSP CEO was interviewed and said: “This award is a great recognition of the work delivered by the ESSP teams in Toulouse and Madrid and of our trustful relationship with the European GNSS Agency. It comes at the right time, on the occasion of the 10th anniversary of the operational declaration of the “EGNOS safety of life” service. It is very motivating to know that at ESSP we are helping to facilitate emergency medical operations by helicopter, and ultimately, we are contributing to saving lives.”

Congratulations to the teams!

Hear from the winners and the ATM Awards team by viewing our awards video now.

The ATM Awards celebrate pioneering concepts and acknowledge significant achievements in the performance areas of safety, cost efficiency, environmental responsibility and UTM programs. The addition of the UTM categories in this year’s program acknowledges the increasing growth of these topics.

Today the winners and runners up across the six main categories are: