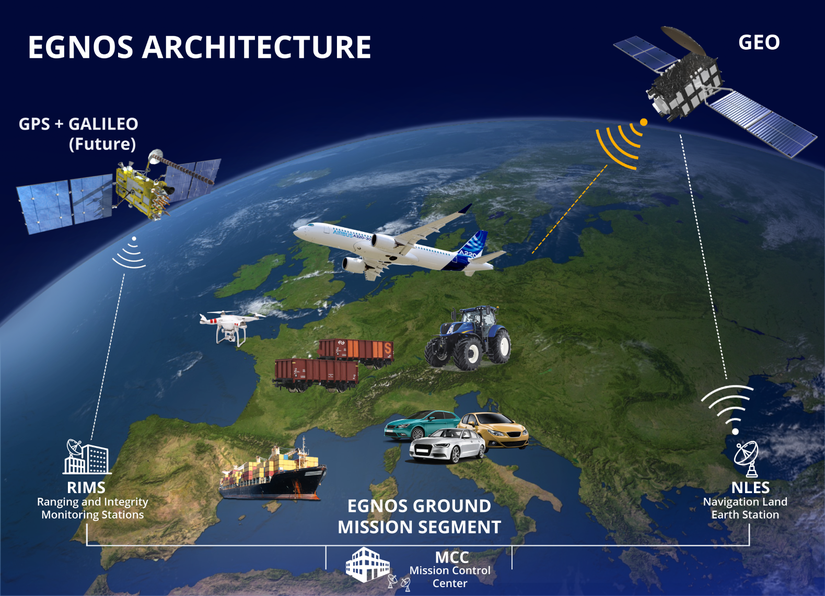 Global Navigation Satellite Systems (GNSS) such as Galileo or GPS are made up of 24 to 30 satellites orbiting in medium Earth orbit (regularly at around 20,000 km altitude) on three orbital spheres. Thanks to very precise onboard clocks, each satellite delivers timing information that is used by receivers on the ground to calculate positioning information worldwide. As individual car drivers, we are accustomed to being guided on our car journeys, but this positioning information is also used for mobility in the broadest sense, whatever the means of transportation, to help position and navigate on our trips.

It is less well-known that positioning, navigation and timing services play a critical role in telecommunications, surveying, emergency response, precision agriculture, mining, public services, finance, scientific research, etc. Search and rescue operations rely on them and it is also feasible to receive their signal in your car thanks to the European e-call service. They are used to synchronizing computer networks and electrical grids, among other areas, that is why the performance of satellite navigation services is considered of critical importance in our society.

One of the most relevant examples is the European Geostationary Navigation Overlay Service (EGNOS) which is Europe’s regional satellite-based augmentation system (SBAS) utilized to improve the performance of global navigation satellite systems (GNSS) above Europe.

EGNOS upgrades the genuine performance of GNSS constellations by adding integrity and even more precision, which makes its positioning services usable for safety critical applications. EGNOS allows the precision landing of an aircraft (also of an helicopter operator providing health related services) or the entry of a boat into a port guided by a satellite. It also helps farmers guide their vehicles with even more precision than with GNSS alone, limiting overlaps, and useless fuel and pesticide consumption.

ESSP (European Satellite Service Provider) as the EGNOS service provider on behalf of the European GNSS Agency (GSA) has been committed to maintaining EGNOS operations in nominal service during the current crisis period.

In order to meet the expectations from EGNOS users and ESSP customers, the company has been implementing actions around three main axes: secured operations based on a detailed Contingency Plan, enhanced protection of its employees (in its Toulouse and Madrid offices), its partners and its supply chain, and strengthened internal communication thanks to collaborative IT tools.

ESSP is pleased to contribute to Europe’s resilience to this sanitary and economic crisis, the impact of which could have been even more severe, without the help of satellite services.

Thierry Racaud, ESSP CEO stated: “As the need for mobility will continue to exist, ESSP is convinced that Satellite Navigation Services in general, and EGNOS in particular, will remain indispensable in the planning and management of travels of any kind with the objective to optimize them and consequently reduce their carbon footprint for the benefit of all”.